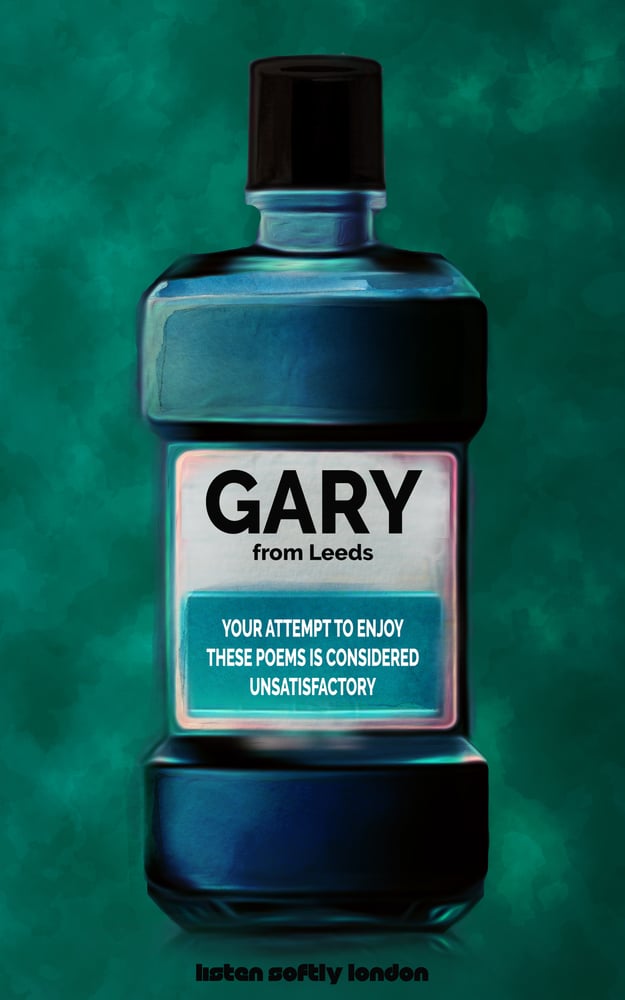 Your Attempt To Enjoy These Poems is Considered Unsatisfactory

If you look hard enough, you will see a smile on these pages. Beyond ravings and curses, here is a tenderness that only someone who grew up in the hallowed land of Yorkshire could feel for the world. Injustice is battled with spit and sensibility, and with such a tenacity, that it’s even possible that his Mum might even consider the last six years of Gary’s life a worthwhile endeavour.

Gary from Leeds presents Your Attempt To Enjoy These Poems is Considered Unsatisfactory. Chances are, he’s right.

Your Attempt To Enjoy These Poems is Considered Unsatisfactory, the debut collection from Gary from Leeds, is available to order, and it will be dispatched in May 2016.

Rob Auton, creator of many wonderful things, has said of Your Attempt To Enjoy These Poems is Considered Unsatisfactory: "If modern society is a piece of plasticine Gary from Leeds is poking it with a stick and asking "What's wrong?" Really good stuff."

Paul Eccentric (The Antipoet) has said of the collection: "Why book a standup comedian when you could book a poet for half the price and guarantee twice the laughs? Gary From Leeds is THAT poet: an angry, bald and northern inspirational comic genius who shits all over his contemporaries with his wry, sardonic wit and slightly sinister; stalkeresque delivery. This is not a book to take to bed with you (especially if you're sharing with a friend): it's the book to take into the bog with you when you're feeling a little bunged up."

Katy Evans-Bush – "Gary From Leeds is a manic original. Whether he’s talking about the air in your Aero bar, Freud’s knock-knock joke, or the little-known uses of the hipster beard, he is saying something about life as we live it – but not as you knew it. And these poems work on the page as well as the stage. He’s clever. He’s quick, he’s original, he’s verbal. He’s from Leeds. And he’s very, very funny. These poems go in and stick."